Public art enhances everyone’s view of the park. We believe high-quality art installations are vital to building a dynamic and welcoming environment for everyone.

In 1989, the Humana Foundation dedicated the Gracehoper as a gift in appreciation of Wendell Cherry, the first Chairman of the Board for the Kentucky Center for the Performing Arts. It has been on loan to Waterfront Park from the Kentucky Center’s art collection since 1999.

The title comes from the central passage of “The Ondt and The Gracehoper” in James Joyce’s Finnegan’s Wake. In the novel, the Gracehoper is an insect representing progress, change, and dynamism. Read more about the artist Tony Smith.

Nestled in the 200 block of Witherspoon Street is Tetra created by American sculptor Charles O. Perry. Sarah Shallenberger Brown’s family commissioned the sculpture in honor of her 85th birthday. Brown was one of Waterfront Park’s earliest benefactors and a funder of the original Waterfront Master Plan. Perry’s large-scale and mathematically-inspired works are located all over the world. 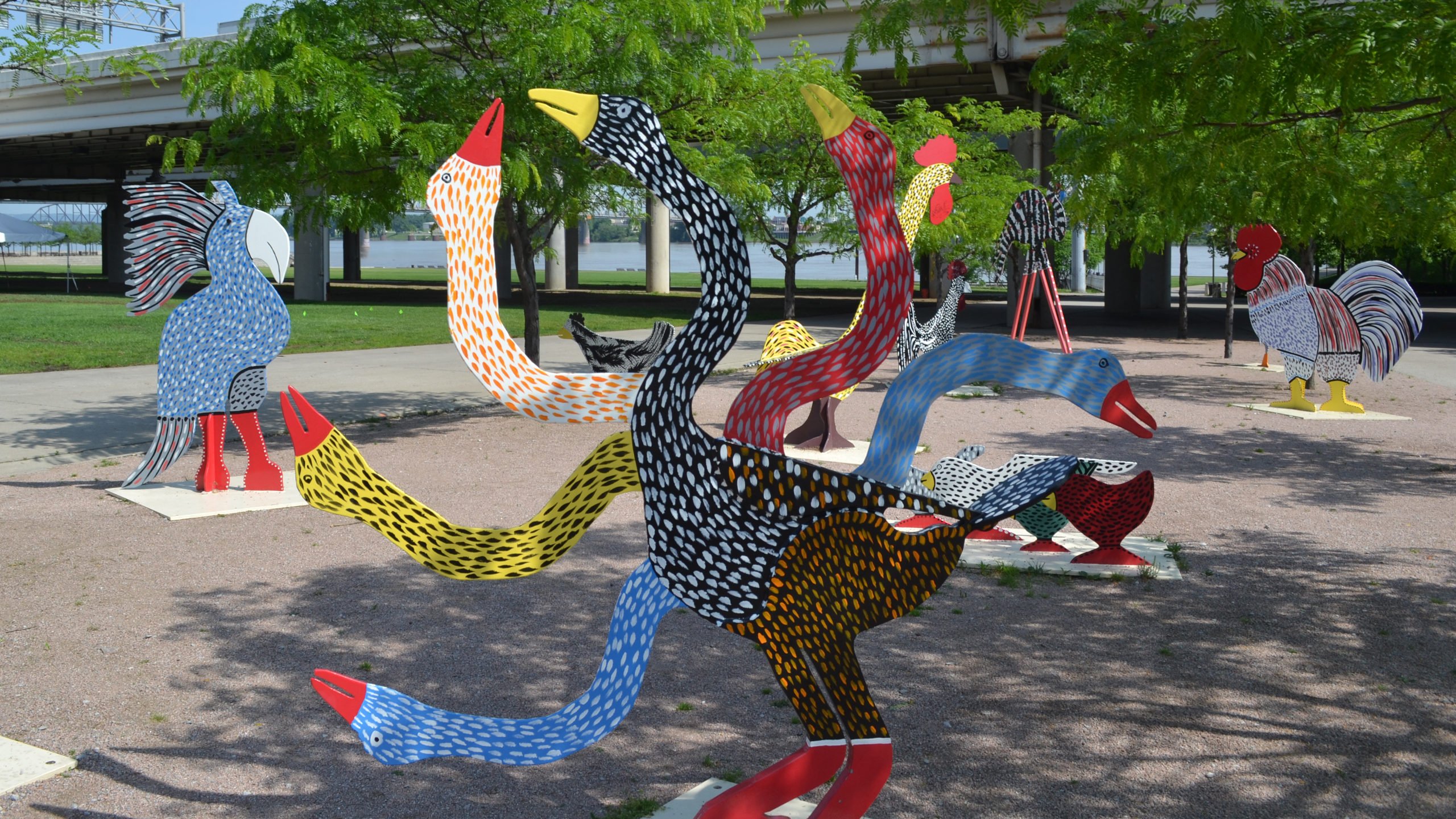 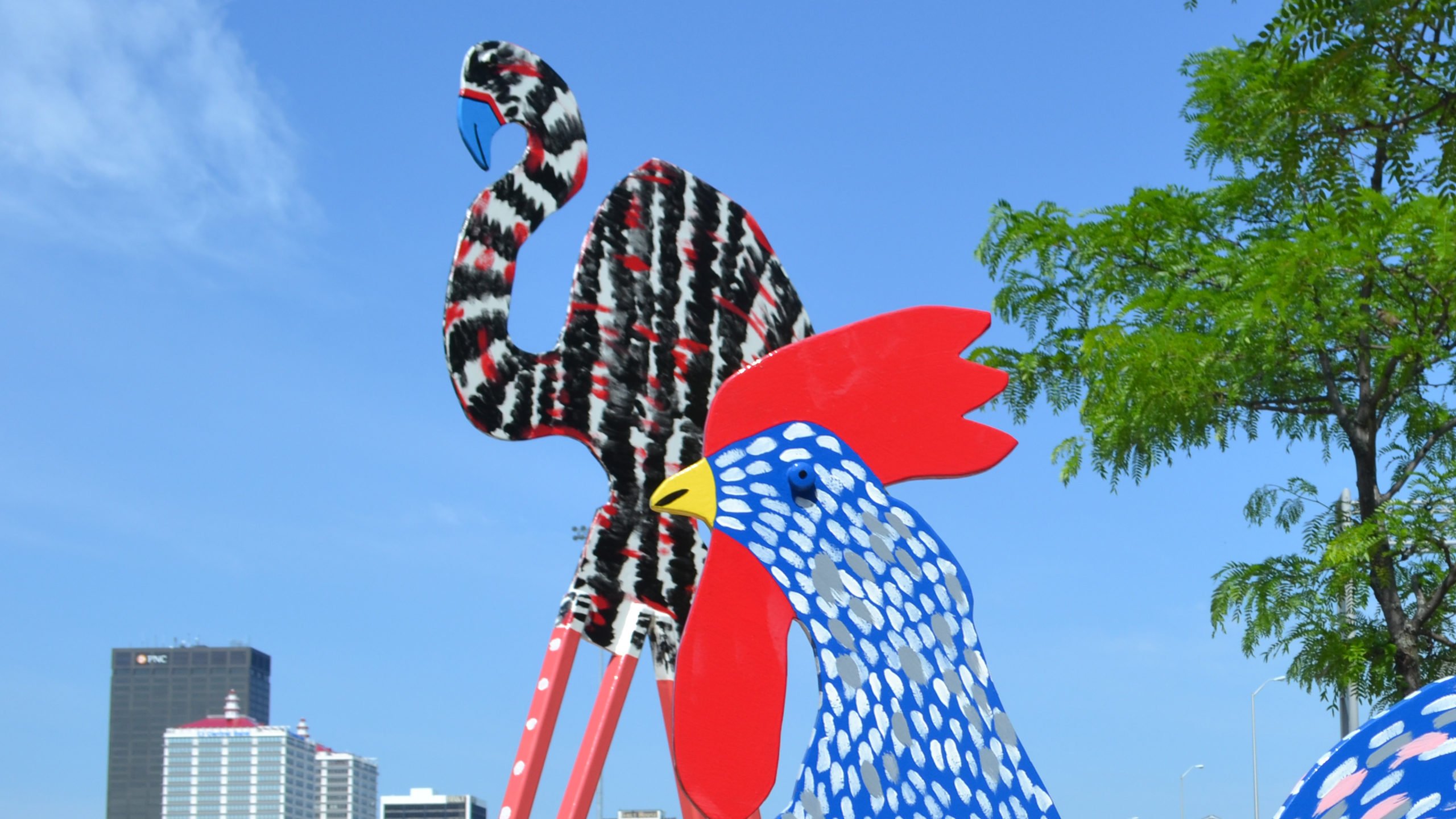 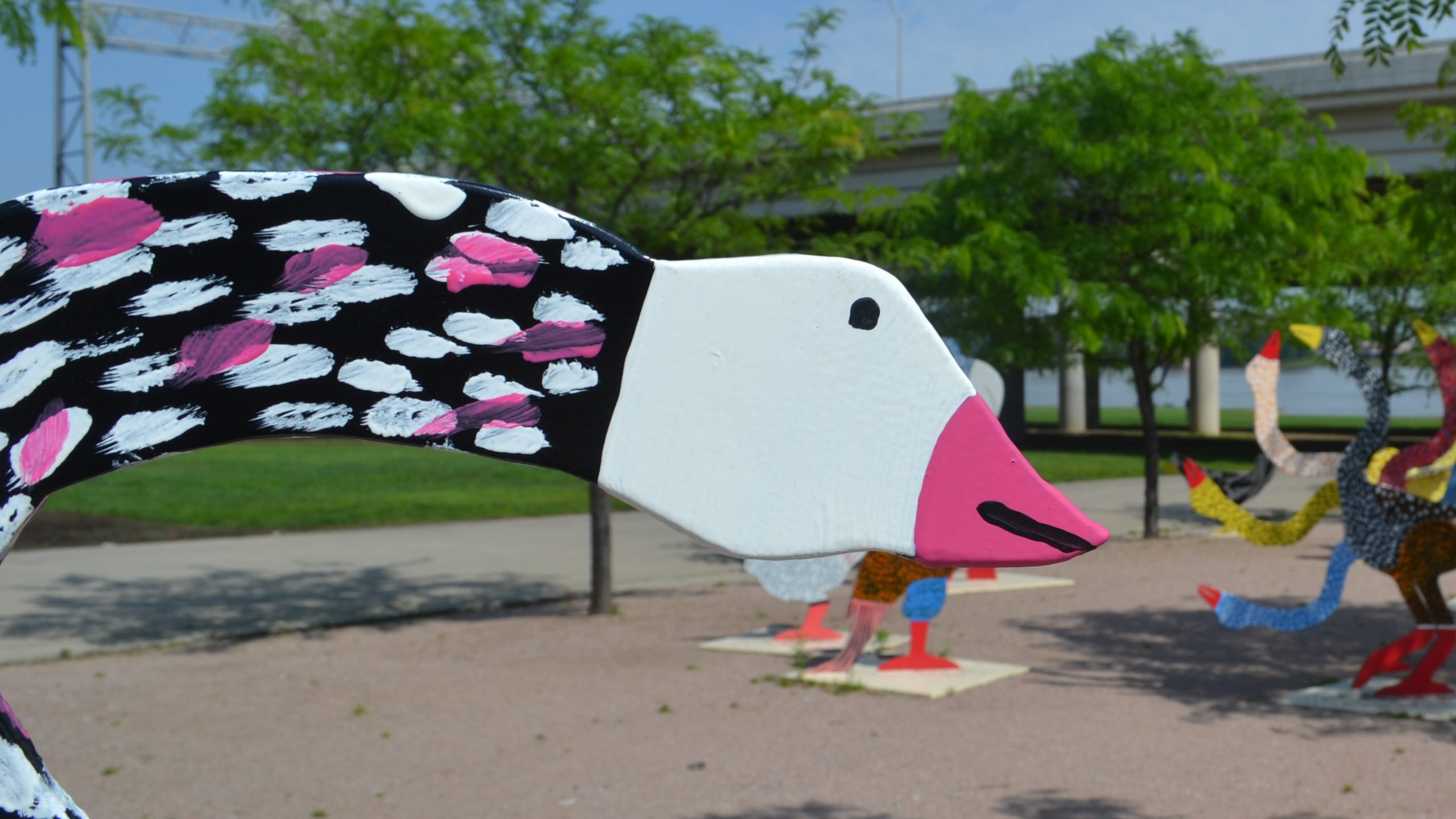 Located near the corner of Preston and Witherspoon Streets, northeast of the Great Lawn, the Flock of Finns is a colorful gathering of 28 metal bird sculptures based on original work by Louisville folk artist Marvin Finn.

Created in 2001, the Flock of Finns was a public art initiative during the administration of Mayor Dave Armstrong. Originally located in public venues around the city, they landed in their permanent home at Waterfront Park in July 2002. Due to rust and weather damage, the Metro and the Commission on Public Art decided to have the sculptures professionally preserved at the McKay Lodge Fine Arts Conservation Laboratory in Ohio in 2014. After a thorough rehabilitation process, they returned to their waterfront home in May 2015.

The Flock of Finns honors the work of Marvin Finn, the late artist in the Louisville community whose urban folk art is known and respected internationally. His brightly colored and patterned works reside in collections around the world. The large metal flock at Waterfront Park is made up of recreations of Finn’s smaller pieces. As part of the initiative to create the large flock, owners of Finn originals lent their pieces to Armstrong’s Art Advisory Committee. Enlargements made of half-inch thick steel were fabricated and painted by artist Melissa Wilson with the assistance of David Thrasher.