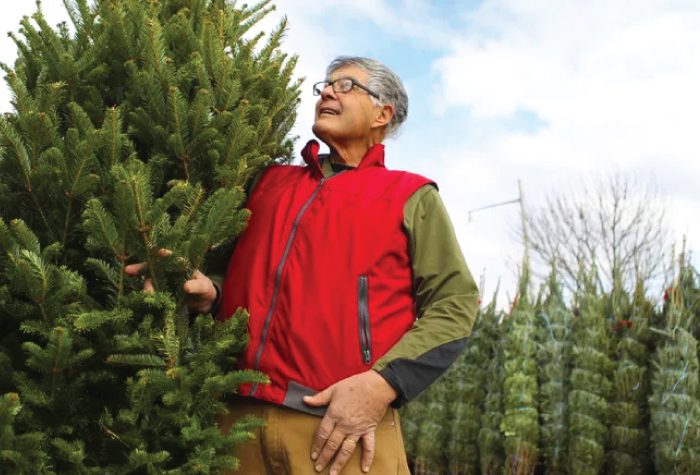 We all have that friend.

The one you call on the way home from work. The one that knows your entire extended family. The one that’s been an emergency contact. A close confidant. A shoulder to lean on. A relationship as close to family as it gets.

For Irvin Book, that was Tommy Thompson Jr. The two young men met in the 1960s when Thompson’s father was running his business out of the open-air Haymarket building in downtown Louisville. Tommy Thompson’s Produce was a staple of the Haymarket, selling coveted fruits and vegetables to the Greater Louisville community.

And who was farming that delicious, coveted produce? The Book family. Selling their produce to Thompson’s business, the Book family was closely linked to the Thompson family through the Haymarket. As trivial as it may have seemed at the time, this link to the open-air market became the foundation of Irvin Book and Tommy Thompson Jr.’s lifelong friendship.

In 1959, the Thompson family began selling Christmas trees at the Haymarket, but they needed help. Soon enough the Book boys were recruited to unload the trees, and in the mix of being exhausted, covered in pine needles and ready to quit, Irvin Book and Tommy Thompson Jr. became friends.

Book’s summers were filled with tomatoes, cucumbers, peppers and green beans. While working on his family farm with his brothers, Book sold his produce to the senior Thompson, and later sold to his friend when he opened his own stand, Tom’s Fruit Market, on Strawberry Lane near Iroquois Park. Every other day, the two friends called each other to catch-up and schedule a new order. Book would drive the produce across the Ohio River to his friend, Thompson Jr., bringing fresh vegetables to Strawberry Lane.

Though not trained botanists, the two began to soon manage a greenhouse together, growing flowers for the produce market. The flowers were a hit, and locals couldn’t imagine buying their produce and flowers from anywhere but Tom’s Fruit Market. And despite the trips across the Ohio with squash, peppers and cucumbers in tow, greenhouse management and daily farming tasks, Book continued to help the Thompson family with their Christmas tree lot.

If you grew up in Louisville, you probably know the exact lot we are talking about. You can recall images of an open-air market filled with the scent of holidays in downtown Louisville—Frasier Fir-lined passageways, flames filling old barrels to light the way and the sounds of cheerful price negotiations while families rally around their perfect tree. For many locals, buying Christmas trees downtown had become a staple. It’s part of the culture of the holiday season in Louisville, and despite the closing of the Haymarket, the friends knew they had to continue the tradition somewhere else.

In 2003, Waterfront Park opened their doors to Christmas Tree Lane—a new, open-air concept Christmas tree market to continue the traditions of the holidays in downtown Louisville. Thompson Jr. was excited by the prospect of continuing his family’s tradition in a new space, bringing Book along with him to open up their stand.
In the years to follow, Thompson Jr. became a local celebrity on Christmas Trees. Reporters and TV stations flocked to his Christmas tree stand to learn more about that season’s pickings, asking for Thompson’s opinion on the inventory, quality, pricing and availability in Louisville. Thompson was a true expert, taking the business over from his father and scouting out the best vendors and suppliers in the local area, bringing them back to Waterfront Park for the annual Christmas Tree Lane.

In 2019, though, Christmas Tree Lane looked pretty different. After arduously preparing for the holiday season with Book, Thompson fell ill at the age of 75. He spent two weeks in the hospital battling a rapidly growing lymphoma before passing away on November 15, right before the beginning of the holidays.

For Book, this was more than the loss of a business partner. This was the loss of that friend. The one he called every other day as he crossed the Ohio River, bringing fruits and vegetables to Tom’s Fruit Stand. The one who managed a greenhouse full of flowers with him. The one who built the familiar metal shipping crate-esque office with him. The one who worked with him in it every day. No, Tommy Thompson Jr. was not just a business partner, or a lost acquaintance from Book’s teenage years. Tommy Thompson Jr. and Irvin Book were great friends, brothers and life-long partners in bringing the spirit of the holidays to downtown Louisville.

To say the loss was hard would be an understatement. That first season back at Christmas Tree Lane was filled with Thompson’s sourced trees, but it didn’t have Book’s best friend by his side. It wasn’t long before Book, at the age of 69, had to ask himself if he would continue on the tradition without Thompson. Workers and customers, who had been buying trees since Thompson Sr. had run the business, began to question whether he would continue in the next year.

In 2020, Book decided to run the seasonal business for the first time without Thompson. In the midst of a pandemic, Book opened Book’s Christmas Trees at Christmas Tree Lane with sanitizer and face masks in tow. Like his friend and his father before him, Book knew the stand was more than just selling trees—it was about keeping the tradition and spirit of community alive during the holiday season in Louisville.

“I keep it going for him,” Book said in a 2020 interview with the Courier-Journal. “He’d be happy that we’re doing it.”

Today, you can find Book at Waterfront Park’s Christmas Tree Lane, which is located along Witherspoon Street between Preston (near Slugger Field) and Brook. His stand will be open daily through Christmas between 8 a.m. and 8 p.m. In the tradition of the Thompson family, Book’s Christmas Trees will sell Frasier Fir, Balsam Fir, Canaan Fir, White Pine, Scotch Pine, Frasier Fir wreaths, white pine roping, wooden reindeer and snowmen. And in the spirit of the competitive pricing of the Haymarket, trees and holiday greenery are on a first-come, first-served basis. Due to a tight inventory of trees this season and the market being in high demand, Book expects that they will sell out early and encourages the community to get their trees while available.

For us at Waterfront Park, it’s important to tell the stories of people like Irvin Book and Tommy Thompson, because they represent the unity of this community. We encourage our park lovers to reach out to neighbors, family, friends and strangers this holiday season to learn more about their stories and the way this community comes together, despite the difficult hurdles placed in front of us. As we come upon the second holiday season in the pandemic, we are excited to support the wonderful people, stories and businesses of our local community here on the waterfront, and we can’t wait to see you at Christmas Tree Lane.

Additional Information on Christmas Tree Lane.
WHERE: Eastbound lane of Witherspoon Street between Preston and Floyd Street
WHEN: Christmas Tree Lane opens on Friday, November 19, 2021 and continues daily until sold-out
8 a.m.- 8 p.m.
PARKING: Free parking is available for customers along Witherspoon Street, in the Green Parking Lot at Waterfront Park (underneath the 1-64 overpass near the corner of River Road & Preston), and in the surface parking lot across from the Great Lawn.