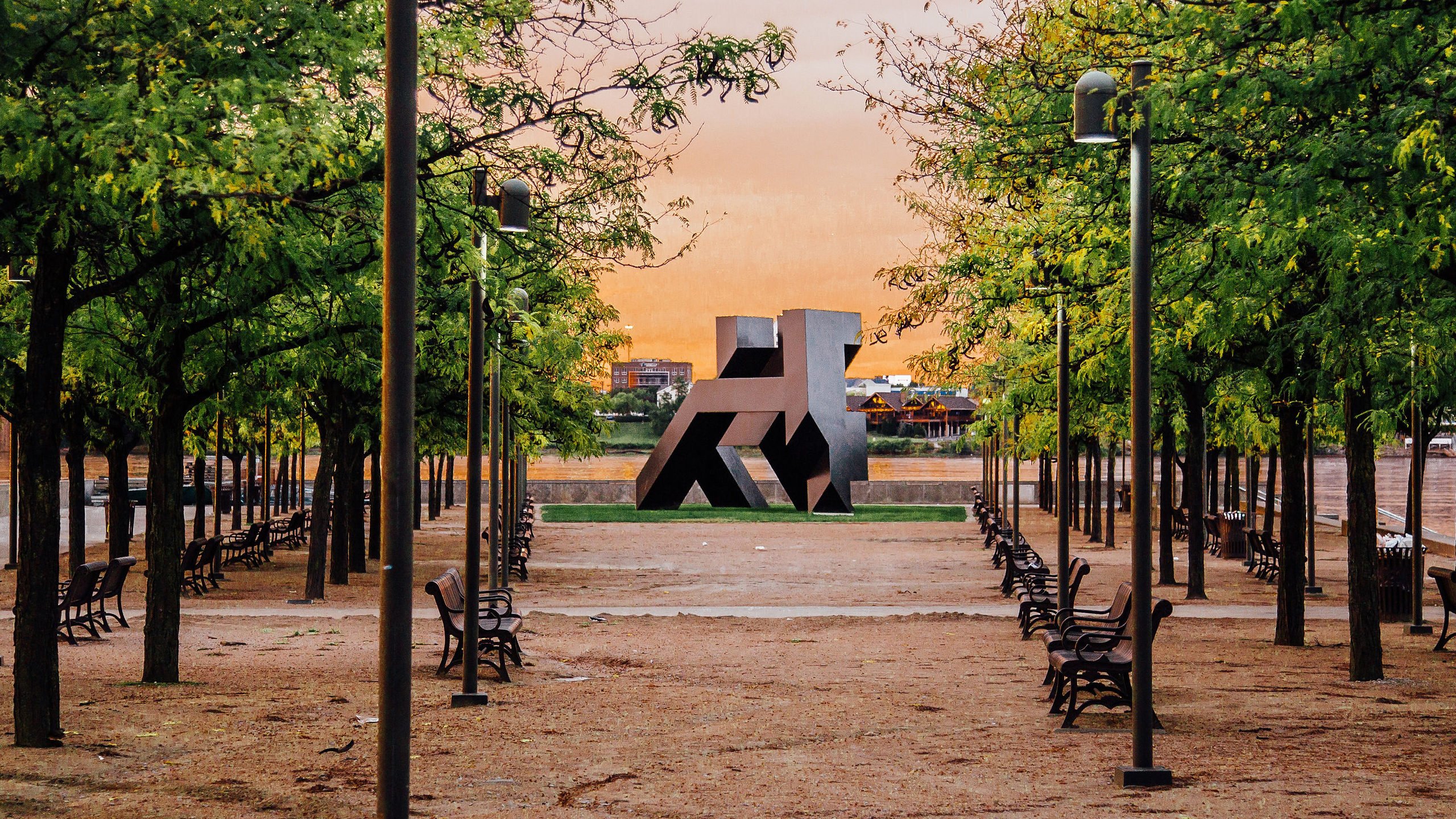 Even as our museums and cultural institutions are temporarily closed, there are many opportunities to enjoy beautiful works of art throughout Waterfront Park.  Take a walk to see them all in one day or enjoy multiple visits to the park to view them. Click here to download a printable map!

Located in the Festival Plaza – this bronze sculpture celebrates the laws of nature and the geometry inherent in natural forms. Tetra was a gift to the Waterfront Park by the children and grandchildren of Sara Shallenberger Brown in honor of her 85th Birthday.

Located on the Overlook near the Great Lawn, this steel sculpture is the second in the series by the American Sculptor. The experience in viewing the iconic piece is dynamic, viewers can walk around, under and through the sculpture. Named for a central passage in James Joyce’s Finnegan’s Wake. The sculpture is on loan from the Kentucky Center for the Performing Arts.

Located adjacent to the South Great Lawn. This colorful gathering of 28 fanciful steel bird sculptures are based on original artworks by Finn. Finn was born in Alabama as a sharecroppers son and had many siblings. He did not have many toys as a child and learned to whittle his own from wood. He moved to Louisville after WWII and continued to create toys for his children and grandchildren. His wife used a jigsaw to cut works that Finn drew. These colorful renditions are a delight to all park passersby and some measure as high as 9 feet.

This area of the park was created as part of the Lincoln Bicentennial celebration and is part of the Lincoln Heritage Trail. The Memorial features a 2.5 times life size version of Abraham Lincoln who is seated on a rock and is approachable. There are 4 bas reliefs which tell the story of Abraham Lincoln’s life and were co-created between Hamilton and Juliette Erlanger. The Memorial is a lovely place for a picnic lunch in the amphitheater which is inscribed with famous phrases from our 16th President who saved the Union and ended slavery in the United States. The memorial was funded by the Commonwealth of Kentucky, the family of Harry S. Frazier, Jr., and the Kentucky Historical Society/Kentucky Abraham Lincoln Bicentennial Commission.

A temporary sound installation on the Big Four Bridge – Bike Sense Louisville is a public art project centered around bicycle use in Louisville, Kentucky. Temperature, air-quality and location data is being collected from volunteer cyclists around Louisville. Using small sensor units that attach to bicycles, the data is being interpreted into sound in real-time and playing in a wind chime like manner over speakers on the Big Four Bridge. With this health and cycling information, the city can make important changes to bike paths and routes. Bike Sense was commissioned by Louisville Metro Government’s Commission on Public Art.

Our restroom facilities, water fountains, and vendors have closed for the season.