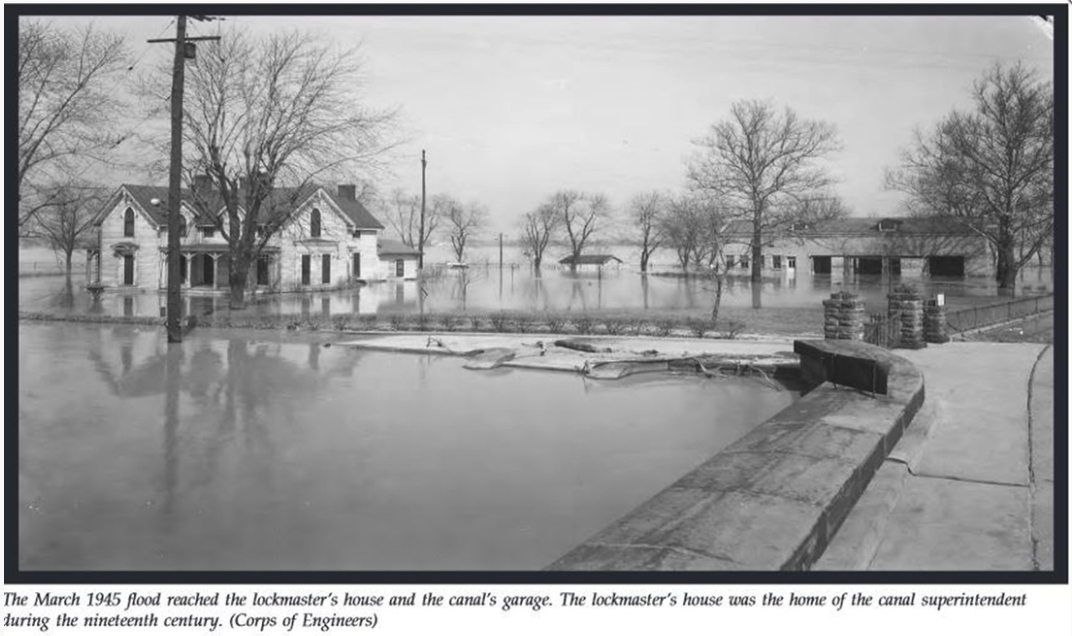 Born in Fords Ferry on November 12, 1928, Bernie soon moved to the only house on Shippingport Island. There, he lived as the only residents on the island with his mother and father in a white, two-story home, looking out on the Ohio River and the city of Louisville. As the Superintendent of Locks and Dams for the Army Corps of Engineers, Bernie’s father, Paul Herbert McGinnis, raised his son with a love of the river, the city and their home on the small island.

Today, Nancy tells Bernie’s stories to us at Waterfront Park, detailing the harrowing adventures of the 1937 flood—the worst Ohio River flood in history, covering 60 percent of Louisville—which left Bernie and his mother nearly stranded on the island. Luckily, the pair were saved by his father, who worked against the current in a small boat to help the family escape. Though Bernie’s family eventually moved from Shippingport Island, and the remaining private property was purchased by the federal government in 1958 to widen the canal, sentiments of time on the Ohio River stayed with Bernie through his final days.

Nancy and Bernie’s story also began not far from the island, but right in the heart of downtown Louisville. The two met at the Louisville Athletic Club, where Bernie was a State Champion Racquetball Player. Marrying four years later, the pair moved to California, where they raised their dogs. After his retirement from accounting, Bernie continued his passion for acting in community theatre in California, as he had done locally at the Jewish Community Center in Louisville. Together, Nancy and Bernie shared pina coladas on trips to Hawaii, solved daily crossword puzzles and listened to their favorite musicians across California and Kentucky. Before his passing, Bernie made clear to Nancy that he wanted his ashes to be cast along the Ohio River, as this city and river was “always his home”.

In celebration of her late husband and his daughter Debbie, Nancy purchased a bench through Waterfront Park—a spot in perpetuity for his loved ones to honor the rich stories, background and life of Bernie McGinnis. Facing the Ohio River, Nancy returns to the park often to remember Bernie and the years they shared together on the river, especially on his birthday in November.

“The first day I was able to come to the bench,” said Nancy McGinnis, “I sat for a long time, thinking of and being with Bernie. Eventually, I walked to Joe’s Crab Shack, looking out on the Ohio River and saying a cheers to Bernie with one of his favorite drinks: a pina colada.”

As an organization, Waterfront Park is honored to be a small part of each of your stories, keeping the memory of our community alive and our mission of connecting individuals to nature at the forefront of our actions.

For those interested in attributing a bench, swing or tree in memory of a loved one, click here.